Learn Spanish in Spain, Altea is a great place to do so! 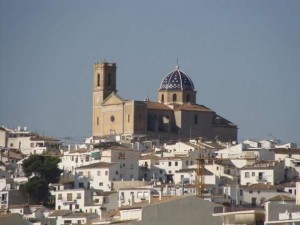 Altea is one of the most characteristic and beautiful villages to visit on the Costa Blanca. Although Altea has a quiet charm, it is close to bigger towns with great shopping facilities and nightlife. There are many towns and villages around Altea, like Calpe to the north, Albir, Alfaz del Pí and Benidorm to the south and La Nucia, Polop and Callosa d’En Sarria in the interior, as well, it is not far from major cities like Alicante and Valencia.

The History of Altea: a bohemian fishermen’s village

Learn Spanish in Spain; Altea comes from the Greek origin of Altahia (I heal) and due to the river Algar (the river of health). Civilizations like the Iberians, Greeks, Romans and Muslims settled in Altea at different stages of history and due to its strategic situation in the mouth of the river Algar, it was perfect for supplying the villagers, sailors and visitors with fresh drinking water which was crucial for the prosperity of the town through the ages. It is worth mentioning that under the Greek and Roman leadership, the area grew as an important trade centre that produced dried salt fish in many factories along the city’s coast, later production was further improved by the Arabians, however at the beginning of the 17th century Altea was severely struck by constant attacks and sieges from pirates, which led to a dramatic downfall of the city’s population and supply of guns to fight the pirates off.

Things to see and do in Altea 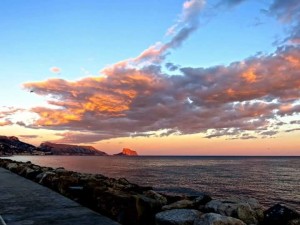 Altea is famous for the emblematic church “Nuestra Señora Del Consuelo” or “Virgen de Consuelo” with its unmistakable blue roof, set on a hill that can be seen for miles around making it a picturesque landmark. The old part of Altea is situated on a steep hill with scenic white houses, orange trees, geraniums and narrow streets full of small designer shops, painters, potters and many other traditional craftsmen’s studios; all very popular with the bohemian artists. Located at the base of the city and along the five kilometre long coast we can find several beaches which extend from the stony Cap Negret beach to the north of Altea, followed by La Roda beach which is next to the old part of the town and then the largest beach, Cap Blanc, extends to the south and is connected to the coast of Albir. All of the beaches in Altea have pebbles, unusual because most of the Costa Blanca is characterized by sandy beaches. Despite this, Altea offers a great atmosphere with very mild temperatures during the winter time and fantastic weather during the summer which constantly invites you to dive into the water making it a definite place worth visiting.

The Costa Blanca one of the most popular coasts in Spain

The Costa Blanca has over 200 kilometres of Mediterranean coastline in the Alicante province of Spain. Alicante forms together with the provinces of Valencia and Castellón, the Valencian Community. Through history and through centuries of important civilizations like the Phoenicians, Carthaginians, Romans, Visigoths and Arabians that have left their footprint on the Costa Blanca a fact that gives it an interesting multicultural atmosphere. 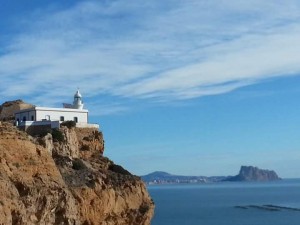 Learn Spanish in Spain; Situated on the shoreline of the south-eastern coast of Spain the Costa Blanca enjoys a warm and dry Mediterranean climate, with little rain and a large number of hours of sun per year. The Costa Blanca has been described by the World Health Organisation as being one of the healthiest climates of Europe and even the world. The temperatures throughout the year are very pleasant, normally no lower than an average of 13°C in winter, and a summer temperatures are not usually over 35 degrees. All of this because of the special microclimate created by the fact that a part of the Valencian community sticks out in to the Mediterranean Sea. Functioning like a warm water bottle in winter and giving a cooling effect in summer. This combined with a ring of mountains that shields the Costa Blanca from the cold centre of Spain in winter. The Costa Blanca extends from the town of Dénia in the north to Pilar de la Horadada in the south. The Costa Blanca North and Costa Blanca South both have their own identity and ´colour´.

To give a small sketch, I want to mention the most remarkable cities and some of their sights, monuments, beaches and fiestas.

Dénia has a beautiful old town with a beautiful castle and it is possible to take a boat to the famous island of Ibiza which has cruises to the island by boat all year round.

Jávea is another cosy city full of trendy cafeterias and bars. It also has a beautiful large beach and lots of Calas (coves). Javea has three parts: the old town, the harbour, and the touristic part, El Arenal.

Following the same route down to the south we find Moraira, the coastline of Teulada which has a small harbour with a small sandy beach which is a must see.

Altea, maybe the most picturesque and typical Mediterranean town on the Costa Blanca, is full of beautiful narrow white streets, white houses and the blue domes of the church on top of the hill which gives the city its own distinct touch. For more information about Altea, see the top of this page.

Not far from Altea, we can perceive the imposing skyline of Benidorm, which is the biggest village in the area and a centre for entertainment with distinct attraction and in all senses.  Benidorm has long sandy beaches; you can stroll through the old town and appreciate its impressive skyline or party day and night. Benidorm also has many theme parks scattered throughout the city and on the outskirts: Terra Mítica, Terra Natura, Aqualandia and Mundomar are some of the most visited ones.

Villajoyosa is the next in line where you will find the very famous hanging houses decorated in different beautiful colours situated along the riverbed. Maybe you will visit the chocolate factory open to guided tours. And next, in the middle of the Costa Blanca we get to the capital city of the province, Alicante.

Alicante is a town worth visiting the whole year round for its mild temperatures in winter and lovely weather during the summer as in the rest of the province. Alicante is perfect for a day outing. It has everything you can ask for from a capital; many cafeterias with terraces, beautiful and trendy bars with nightlife, excellent restaurants, and a nice small beach.  Furthermore, there is a huge castle on the mountain of Santa Bárbara with breathtaking views. It is worth seeing.  Alicante also has an important connection to Algeria and there are ferries that travel there every day. From Alicante you can also visit the capital of Spain, Madrid. In just two and a half hours on the high speed trains, you can leave right from the centre of Alicante to reach Madrid.

Las Fiestas, the many festivals on the Costa Blanca 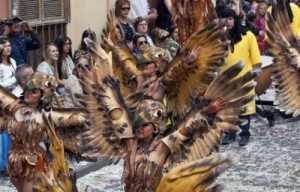 Learn Spanish in Spain; If you are visiting the Costa Blanca close to the 24th of June, you cannot miss the main fiesta of “Les Fogueres de Sant Joan”, a fiesta full of cardboard, wood and paper monumental statues that you will find  on the streets and which are put to flames on  the night of “Les Fogueres” celebrations. It is very similar to the “Fallas” in Valencia which is celebrated in March every year. “Fallas” or “Fogueres” are not only celebrated in these two major cities, but in other towns along the coast and interior of the Alicante province. They take part mainly from May to October every year.  Also the fiestas of “Moors and Christians” are celebrated in almost every town, village or city in this area. The most important and ancient event as far as the Moors and Christians is concerned, takes place in Alcoy, the inland part of the province. When it comes to fiestas and festivals, there are so many on the Costa Blanca, you are bound to see one wherever you are and whatever time of year. And we must not forget the “Semana Santa”, Easter Week, throughout the whole province during the months of March, April or May depending on the time of the year, where processions make their way through the streets, carrying religious icons and symbols of their faith. In major cities such as Alicante, the processions go on for miles and will last until the early hours of the morning every night through Easter week. Children as young as 3 or 4 years old take part and crowds will swell into the thousands.

Beach life and good food on the Costa Blanca 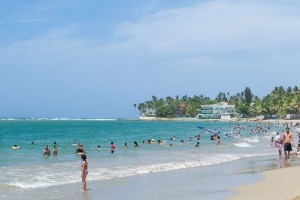 Leaving Alicante behind, and on our way down to the south of the Costa Blanca you will find many coastal villages and small towns with impressive and vast sandy beaches like the ones in “Arenales Del Sol”, Santa Pola and Torrevieja. Beaches on the Costa Blanca vary from little and intimate coves to long sandy beaches. Click here for more information about the beaches and beach life on the Costa Blanca.  An additional and important part of your stay will be the food, wine and beer on offer in the area. The first word that comes to mind when talking about Valencian gastronomy is “Paella” a rice dish, which can be cooked in many ways.This Valencian and Alicantinan dish is known and loved all over the world, and has even become a national symbol. Although its popularity has reached into national and international kitchens, we can promise you that only here in Valencia will you taste the authentic “Paella” made in the traditional way.

Learn Spanish in Spain, come and enjoy the Costa Blanca, you are invited.